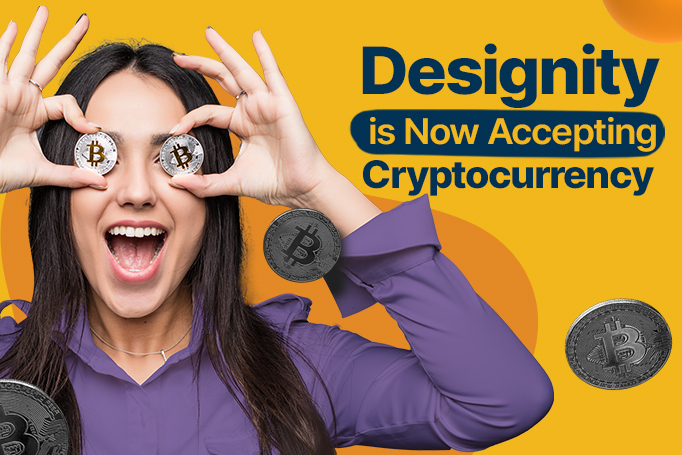 The digital age has thrown a few surprising curveballs at businesses in the last few years. The best example is 2020, the year that the in-office workplace found itself at home, overnight. From water-cooler banter and conference room meetings to Zoom calls and scrambling to figure out how to transition in-office work to at-home computers. The change was a kick in the gut for businesses that didn’t adopt forward-thinking tech sooner.

If there’s one thing that we’ve always done well, it’s surf with the changing tides rather than fight an upstream battle. In an effort to future-proof our brand, Designity is pleased to announce that we’re now accepting Bitcoin and Ethereum as payment options.

Microsoft became an early adopter of Bitcoin in 2014 when it began accepting cryptocurrency as payment for games, apps, and other digital content. This move was quickly followed by PayPal, Etsy, Overstock, and now Designity.

The way we see it, cryptocurrency is the new frontier and we’re ready to get building. Here is why we decided it was time to add crypto to our payment options.

While the cryptocurrency market is always fluctuating, one simple fact remains: no matter where you are in the world, paying with cryptocurrency means that there are no hidden bank fees, no conversion rates, no more waiting to receive payments, and no limit on the amount you can send or receive.

According to the Wall Street Journal, credit card companies are increasing their processing fees. This means that prices for goods will likely increase, especially if they’re paid for with credit cards.

Paying with cryptocurrency cuts out the middleman (banks), making it much cheaper in the long run than traditional payment options.

That quick turnaround is one of the biggest contributing factors to the widespread adoption of cryptocurrency as a payment option, no matter what industry you’re in.

Though there are many benefits of paying with cryptocurrency, one of the most appealing is its security. Bitcoin is notoriously difficult (if not impossible) to hack. Credit cards, on the other hand, consistently make headlines for how frequently fraudulent transactions are made.

According to Define Financial, there were 4.8 million reports of identity theft and credit card fraud in 2020 alone.

If we’ve learned anything in the last few years, it’s that traditional, flat money just doesn’t work in the digital world we’re living in. We’re catapulting into the future and want to take you along for the ride.