Life-Changing Design Trends That Will Define 2022 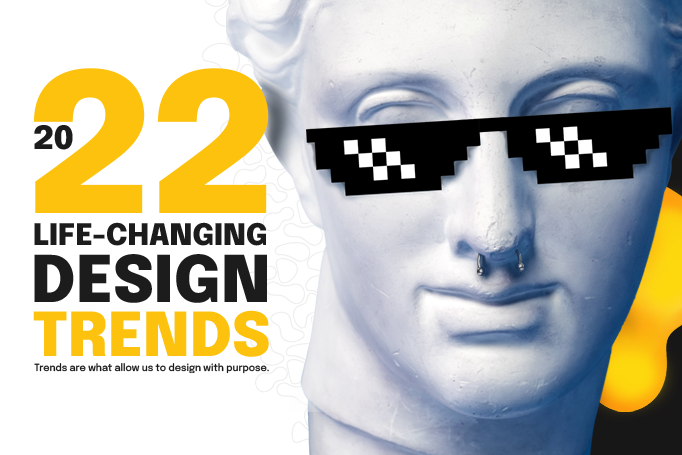 What Makes This Year Life Changing?

While seemingly unimportant, trends help us stay informed of the times. After all, how could you possibly craft up a killer creative project without them? Sure, your brand guidelines provide the consistency you need, but what are you doing to stay ahead of your competitors? That’s where design trends come into play, however, next year’s trends are somewhat life-changing.

With headlines like Facebook becoming Meta, companies integrating blockchain technology, and Gen Z taking over global consumption, it’s important that you’re aware of what’s to come. Adopting these life-changing trends is somewhat similar to conversations adopting the Internet in the ‘70s–don’t be last in line.

In order to pull together an accurate report, we consulted experts and referenced our most reliable resources. From this quest, we’ve narrowed down the 3 most relevant movements for the upcoming year, each of which is worth keeping tabs on.

The future is here, now.

When it comes to all things virtual reality, non-fungible tokens (NFT), and Web 3.0, blockchain technology are to credit for their existence. While the concept isn’t new, there’s more to blockchain than making passive income with Bitcoin or buying JPEGs on NFT marketplaces. This movement has allowed companies and creators to monetize digital goods–and not just large enterprises either.

There’s a good reason influencers like Gay Vaynerchuk made over $90 million in three months of selling NFTs. These areas are gaining traction and popularity for a reason, especially with the foreseeable metaverse in the (very) near future.

Creating virtual experiences within the metaverse will eventually become something everyone can do. Gartner forecasts that by 2023, over 50% of companies will use low-code platforms (LCAP) to operate at least part of their infrastructure. LCAPs create more automation of operations so that even non-programmers are able to create Internet applications, reducing the quantity of work required to create them.

With the next phase of the Internet on the way, it’s important for non-coders to be able to take part in the movement. Companies like Nike have taken a step into the future by integrating major virtual components into their traditional operations. But where does this all come from? Well, there have been several megatrends driving these movements into our modern-day.

As people increasingly regard the virtual world as the physical world, consumers will likely increase their trust in the development of machine intelligence. This will only continue to push technology to advance in such a way that supports things like the metaverse–replacing many foundational aspects of what we deem as the standard today–expediting the future of our world as we know it.

The escape to better days continues.

It’s no secret that the COVID-19 pandemic has been a huge driver of a number of trends. For one, people have been forced to stay within their homes, leading to a series of mutual feelings we can all relate to: loneliness and a longing for connectivity.

According to OnePoll, 41% of 2,000 Americans turned to their childhood comfort foods during the pandemic, so much so that 67% of them said they’d rather give up social media than give up comfort food. The reasoning behind the longing for comfort food is simple–nostalgia.

Nostalgia as an emotional trigger and modern tactic has also been favored forever by many brands’ marketing teams, like Microsoft and Apple. While common in the food & beverage industry, It’s likely we’ll see others leverage this trick in their design strategies, giving into the very feeling that we all crave at the same time.

The irony though is that nostalgia is different for everyone, especially different generational groups. The feeling is something we as humans can all relate to, finding joy in past notable trends like ‘70s retro art, ‘80s punk fashion, and ‘90s polaroid filters.

But as post-pandemic effects begin to settle into place, people have no choice but to either look back on the good times, a better (more optimistic) future, or simply make the best of the present moment with euphoria. This escape to better days is only the beginning of a year we're likely to see for the very first time–in a vivid, nostalgic way.

Let’s face it, the days of waiting around for better days are over. Sometimes escaping doesn’t cut it, leaving you no choice but to make the best of things. Similarly, consumers are seeking transparency from brands, pushing companies to now be held accountable for their absence in important matters. Gen Z, in particular, is a driver of this movement, demanding that companies be more actively involved in diversity and inclusion, climate action, and other efforts.

But with 41% of Gen Z identifying as gender-neutral and 48% of 6-21 year-olds in the US belonging to racial or ethnic minority groups, it’s safe to say this “trend” isn’t much of a trend–but is the future. The generation now holds $143 billion in global spending power, offering brands a major market to prioritize. That’s a whole lot of capital looking to spend on sustainable and ethical goods and services.

This is very well proven with 73% of Gen Z saying that they would even pay more for sustainable items. But it’s not just Gen Z who cares about this. 75% of US millennials say that manufacturers should make recycling directions more prominent on packing so that they too can participate in the movement.

This proves that it’s not just about the product being transparently positive, but things like packaging design are becoming increasingly important as consumers shift their focus. Faking this transition won’t cut it, so making meaningful and impactful changes to design can really make a difference.

Today calls for significant change–a change that’s visible inside and out. And by being more mindful within the design space, brands can communicate their support in a more effective, vocal way.

Liked what you read? Explore the full trend report.

There you have it–three major concepts that’ll drive a number of design trends. The good news is that this upcoming year is all about embracing the new and extreme–so going outside of the box is increasingly becoming the norm. The best way to do this is to become a trendsetter in your industry, leveraging all of the available information out there–like downloading Designity’s trend report!